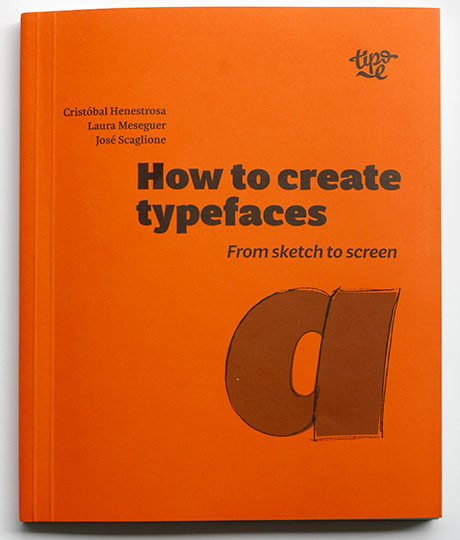 How to create typefaces

From sketch to screen


How are typefaces designed? What is the process? Which characters are essential? What is the difference between roman, italic and cursive? What is OpenType? In How to create typefaces Cristóbal Henestrosa, Laura Meseguer and José Scaglione answer these and many other questions in a straightforward and direct way.

This publication, aimed at new and novice type designers as well as those trained in the field, unravels the fascinating task of creating a font, from sketch to screen.

The thinking that happens before even starting the process of creating a new typeface.

On the similarities and differences between methods of writing, calligraphy, drawing, and type design; shared characteristics, common elements and considerations when sketching typographical characters.

On approaches to sketching, proportion and structure, consistency, optical correction, planning and workflow.

On digitising the sketches, principles of drawing with digital outlines, fundamental and complementary characters, sequences and derivations.

On basic methods to control and adjust spacing: sidebearings and kerning, the importance of counterform, numerals and vertical spaces.

On series design and family variations – italics, weight and proportional variants, optical sizing, superfamilies and other ways of extending a typeface family.

On the role of digital technology in typeface design, from the basics of formatting to the possibilities of Open Type features and Unicode.

Reflections of each author on their personal experiences of the process of type design.

Cristóbal Henestrosa (Ciudad de México, 1979) is a graduate in Graphic Communication from the Escuela Nacional de Artes Plásticas at the National Autonomous University of Mexico (UNAM), possesses a master’s degree in Typographic design from the Centro de Estudios Gestalt and also a diploma in Type Design from The Cooper Union. His type families have been prizewinners of the Type Directors Club in New York and Tipos Latinos (Biennial of Latin American Typography). He is the author of Espinosa: Rescate de una tipografía novohispana (2005), as well as professor of typography and type design at the UNAM.

Laura Meseguer (Barcelona, 1968) is a freelance typographer and type designer based in Barcelona. She also teaches and eventually writes. She works in custom lettering and type design projects and through her own digital foundry, Type-Ø-Tones, she releases and promotes her typefaces. These days she is busy with some commercial and personal jobs, and the design of Qandus Latin for the Typographic Matchmaking in the Maghrib project.

José Scaglione (Rosario, 1974) is a graphic designer, typeface designer, and co-founder of the independent type foundry TypeTogether with Veronika Burian, where they have published numerous award-winning type families. He teaches typography at the University of Buenos Aires, Argentina, and is frequently invited to lecture about typography and to lead workshops on typeface design at international conferences and academic institutions. José collaborated with Jorge de Buen Unna on his book Introducción al Estudio de la Tipografía. In 2012 José acted as chairman of the Letter.2 type design competition and conference. In 2013 he was appointed president of the Association Typographique Internationale (ATypI).


Bookshops, where to find the book

The book Cómo crear tipografías was originally published in Spanish by Tipo e in 2012 and since then it has been published in different languages.

How to create typefaces, from sketch to screen
Tipo e, May 2017. Translated by Christopher Burke and Patricia Córdoba.